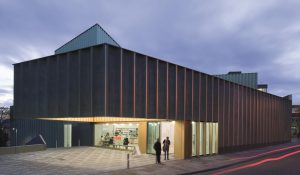 Day 2 begins with a walk through the historic Lace Market, once the heart of the world’s lace industry, to get to Nottdance’s hosting partner for the evening, Nottingham Contemporary – a leading art gallery for contemporary art in the UK. Designed by Caruso St. John Architects, the striking building is recognisable for its clean lines of concrete (imprinted with lace) and gold. When it opened ten years ago, the structure seemed to have landed from another planet and nestled itself accidentally in the (predominantly) Victorian landscape. But accident it was not, for it marked a very Western endeavour – that of creating a spatio-temporal tactile (yes, I said ‘tactile’) break in order to generate a new sense of place and a revitalised unity between culture, technology and (shared) purpose.

And indeed tonight, such endeavour was palpably at the centre of artistic concern, questions and experimental practice. Joe Moran’s Thirst, performed by Sean Murray and Karl Fagerlund, is a seven-minute intervention in space – blink and you could miss it in the cacophony of the crowd. 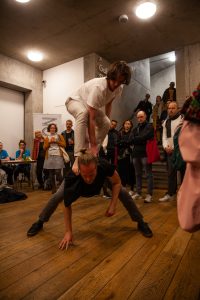 Introduced as a “spectacle”, a term coined by Guy Debord (French philosopher and Marxist theorist, and leading figure of 20th century revolutionary movement the Situationist International), the piece pre-empts a 21st century wilful play of resistance against post-capitalist economy and its systemic degradation of human life. The performance is both quiet and furtive yet colossal, testing the very limits of balance, resistance, intimacy via the sense of touch and consent between two, and, refreshingly, between two men. Moran shows us that if “The Society of the Spectacle” does indeed degrade, its tools and force can be harnessed and re-orientated towards counter-ideologies.

Tools as technology is further explored in Matthias Sperling’s No-How Generator, performed by himself and Katye Coe, with guest artist and dancer, Jennifer Lacey.

Before entering, we are given a question: “How in the act of dancing in performance can we experience new ways of knowing?” Initial humour is ensued by the ceremonious, dense and all-encompassing, slowly building up from the two mirroring bodies’ continual rocking and extending outwards, and layered voicescape. Together, they create a flow, a current, working the very materiality of space and us within it. The lighting turns red recalling ancient rituals and the celebrated, honoured and worshiped force that is fire (another technology). Here our bodies are absorbed in the thousand ecstatic voices conjuring through the bodies of the dancers as conduits to other worlds. This is a bold proposition for the audience: its immersion and ‘totalness’ is incessant and overwhelming. The idea of the crowd and its fanatic oneness in the presence of a multitude recalls for all in the West difficult memories, a deep sense of shame and the indelible desire never ever to repeat. However, here contained in the belly of Nottingham Contemporary, a church of concrete, deep below ground level, I too am reminded of the function of the ‘core’ navigating ‘inside/outside/inside’ – a necessary core from which culture, as an embodied, intuitive, felt-sense of knowing, originates.

We move next to another place of worship, St Mary’s Church, to attend Janine Harrington’s Screensaver Series performed by herself, Vanessa Abreu, Stephanie McMann, Elisa Vassena, and Rosalie Bell. 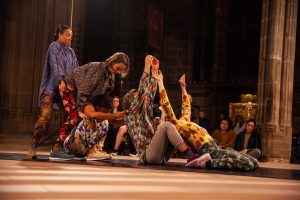 Meticulously choreographed, it is a technical work of precision but also of capacity for attention, taking care and taking time for oneself and the other – another play of somatics leading to meditative repetition. We delight in its gift of space (and distance) and holding.

Slug Horizons, created and performed by Eve Stainton and Florence Peake, returns us to Nottingham Contemporary. The two, stripped naked but for a black top, welcome us into the space like friends to Donna Summer’s iconic and sexually charged I Feel Love. The space is relaxed, warm, playful. One can instantly feel the tantalised excitement of the audience.

This is going to be fun.

The stage is intimate and at floor level. We are seated around it tightly on makeshift beanbags, made from odd geometrical cuttings of foam. The stage floor is covered with a print appearing to merge different fragments of Florence and Eve’s bodies together into one representation. I also notice amorphous ceramic objects in red and pink clustered in one of its corners and another small station of pens and pastels. /
Florence and Eve begin and invite us to participate in colouring and drawing their vulvas, genitals, bellies, marking the contours of their bodies with lines, colour and sticky fabric. The audience is only too willing to engage in such intimate and playful proximities. The space stays light and dynamic filled with humour and laughter, Florence blurting out, when one sticky tape is positioned into her crack (formally ‘vertical gluteal crease’) “this one is going to hurt!” or casually asking a member of the audience to sort out her pens and lids so she can move to the next section of the piece.

Five plastic pouches are hanging from metal chains over the ceramics. Florence and Eve remove the plugs. The pouches’ beaks/teats begin to release a slime: translucent, brownish-pink, flesh like. They form heavy lines, pulled down by gravity and eventually hitting the installation below. Eve and Florence intertwine each other from the crouch (what Florence has described before as the quintessential patriarchal fantasy of lesbianism) and begin to assert their individual movements. It’s a play of agility, suppleness, dexterity within the frame of power and resistance and, simultaneously, of generosity, curiosity and ingenuity within the frame of creativity – a tight and thin negotiation, exploiting bodily situations and gravity, and importantly, making at all cost.

When they finally disengage, they both perform orgasmic rituals, not with physical but imagined touch, raising interesting questions around the origins of bodily pleasure and erogenous zones, i.e. is it another construction? Then it’s a game of tongues, a kind of intimate, explorative language between two lovers: the sucking of tongues; tongues hanging low, bouncing off each other; and, classic, tongue fighting. The pair then recounts their first encounter in the present tense while renewing their intertwining practice. Eve tells Florence, who was struck with lust on first sight, “no, I don’t see you… I think that I smell you before I see you”. They trace before us the mundane jarring memories of their encounter, one that is being re-constructed and re-fantasized in front of our eyes. The recalling and re-making, calling upon simultaneously memory and imagination, act to somehow distract and diffuse the intensity of the physical power play. Florence throws “… my sick is going into your mouth”. Eve: “no, it’s going into my shorts… I think it’s inside my shorts and inside my mouth”. In this sharing of bodily waste, they comically report “[being] caught in the liminal space”; “a deep transformation of space”; “we’re transcending”; “maybe my entire body has been your sick… So we’re liquid.”; “our becomings”, “it’s beautiful”.

They escape the stage following a trail of spit (their own) across the crowd while actual slugs, hermaphroditic being, perform their mating ritual on film projected on the wall: they entwine their bodies while hanging from a slimy mucus rope. Each slug has male and female sex organs and will both fertilize and be fertilized by the other slug; they bring closer the idea and imperative of looking out towards the poetics of re-imagined pasts to re-construct our present and shape our future in all of our most intimate and shared practices.