CHAUD is co-created by feminist choreographer and dancer Antonija Livingstone and award-winning artist, performer, and Trans & Indigeneity activist, Mich Cota.
The performance takes place at BACKLIT, an artist-led contemporary gallery and studios in the heart of Nottingham. Backlit is housed in a 19th century textile factory, once owned by Samuel Morley, an eminent national political figure (MP for Nottingham, social reformer in adult education and the abolition of slavery, and philanthropist).

As I enter, I am struck by the scale of the site: a long, generous internal space connecting with an outside yard leading onto the street. Techno music is playing (courtesy of sound designer and composer Brendan Dougherty), giving the empty shell a distinct club/rave feel. 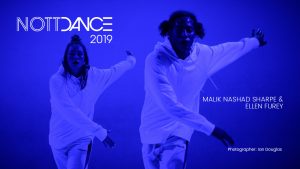 I hook up with Malik Nashad Sharpe (aka marikiscrycrycry, US/UK) who co-created and performed SOFTLAMP.autonomies with Ellen Furey (CA) on day one of this year’s Nottdance. We talk about the piece, the burning of incense at the start. They tell me that the incense is mainly for them, and I like that: perhaps a meditation, a centering, an everyday lived practice for us to see and know. The conversation turns to the monumental, exhaustive and repetitive nature of the choreography. For Nashad Sharpe, as a non-binary black person, it stands as an expression of political action and struggle reflecting the conditions around their bodies. With Ellen (who is not present), they wanted to show the mental and physical character of exhaustion and struggle, and yet the unbreakable will of two subjects who get up again, keep coming back. This is not easy, comfortable material. Malik performs in many mainstream settings, including on the club scene.

The culture of clubs and the underground scene was and remains an important site of refuge and resistance for the marginalised experience and the expression of non-normative creatives – especially queer performance artists, the most prominent figure among whom is body artist Ron Athey (US).

At BACKLIT, soft, warm sensual yellow and red lighting brings the inside and outside together, exciting our senses in anticipation of both pleasure and risk, for while CHAUD (the French for ‘hot’) or ‘chaleur’ (warmth as temperature or emotional) is the most human basic necessity to sustain, heat can also burn.

And risk is announced when Livingstone throws at the onset: “We’re going to move a lot, take care of yourselves”. And she means it. This is not a “safe space” (a 1970s feminist concept) – initiative that, in the context of trans people’s access to women’s spaces today, is the subject of controversial and heated debate, and often severe criticism. This is a “post-safe” space, a place for the type of dialogue and material that is, of necessity, challenging, uncomfortable. The type of exchange and presentation (not a representation) that overthrows all of our white, middle-class, heteronormative, western assumptions and the lies we tell ourselves about our identity, our all too often “skewed” liberalism (and I include myself in that).

The performance is built around a series of site-specific actions (ten) and constructed ‘lived-in’ frames dotted around the site, its narrowest edges and beyond. The delivery is very dynamic and fast-paced. Both Livingstone and Cota exude presence, a sense of urgency and unwavering purpose. 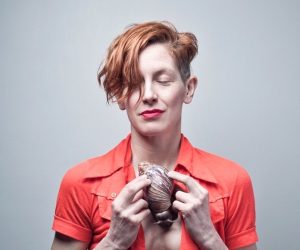 This is activism in the making. We have no idea what is going to happen next or where. All we know is that when it happens we need to get out of the way pronto. They run across the site holding a giant tarpaulin that floats and waves behind them, catching all around. Livingstone shouts out “get out of the way!”. It’s make or break. The action will not hesitate. Protective barriers are tipped over while the two escape to roam the streets. Other actions include pouring barrels and buckets of water onto the ramp giving access from the street to the yard and watching it flow and gather. Other actors in the piece include manure, earth, hay, lavender, leafy branches and ribbons to name a few. Cota waves the branches energetically above her head, we smell the green. She then drops her top down and begins vigorously throwing a mixture of earth, manure, branches and hay – debris comes, brushing and/or flying into the audience. Livingstone’s giant snail also joins us – the performer spits on her hand to gently invite them out 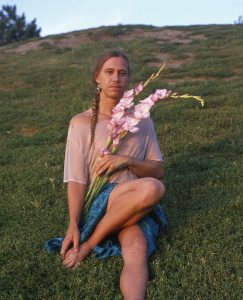 of their shell. Cota covers herself with long, flowing ribbons (blue, white and orange) assisted by Livingstone and sings in Algonquin – her indigenous language – performing an unknown dance. Physical contact and interactions with members of the audience are at play throughout via the sheer exposure to the environment, and then warmth, tenderness and a desire to connect emerges; Livingstone dances close to a member of the audience, whispering to them; Cota offers one end of her ribbon to another, playing a short game of resistance before rolling her body around it and hugging the individual; Cota’s hand held in the air invites the hand of another for a moment. Fantastic scenographic frames are being generated in front of our eyes in quick sharp successions: Livingstone takes the lead in moving the flood lights around the floor, switching or turning off other sources to create instant new spaces. One doesn’t miss that she verbally cues the changes to assistants either, which, for an audience, breaks with the conventions and staged magic of theatre.

But magic is not lost. Instead the magic and uniqueness of place and people, and their capacity to make and witness and hold and behold lives, and its memory dances here, here, here and here.