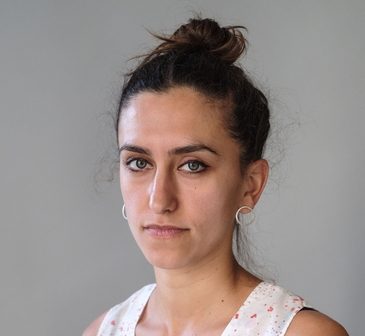 Fernanda Muñoz-Newsome was born in UK, of English and Chilean descent. She lives and works in London as a dance artist and choreographer, working independently and collaboratively since 2009. Working with composers, visual artists, music producers, pop/punk bands, choreographers and dance artists takes her interests and performances to galleries and alternative performance contexts.

Fernanda’s work is concerned with experience and transformation between public and private bodies. She has recently finished the MA in Creative Practice at Independent Dance and Trinity Laban where she made and performed a body rites itself.

In the last two years she has made: something orange: a body slip-slides through knowing, performed with Jamila Johnson-Small, sound by Nicholas Owen (Pumarosa) at David Roberts Arts Foundation for the exhibition opening of (X) A Fantasy and at Oval Space with Pumarosa, 2017. She performed 2DiveIn a solo, sound by Nena Zinovieff with CAMPerVAN at Tate Modern, 2017,  Something purple: my whole body over flows with thought, performed at Calvert Foundation at the launch of The Six Sense of the Avant-Garde and at London Topophobia, 2017. Passage a group work and collaboration with Pumarosa was performed at ICA, 2016. let the body, a commission made with music producer Shelley Parker, performed with Jamila Johnson-Small at Arnolfini Bristol, 2016.

Fernanda performed with Helm and Alice MacKenzie at South London Gallery and (33-33), 2015 and made Naked Nude a solo part of Airbomb at Royal Academy of Art, 2015. In What I Am Seeing the Sun was a collaboration with Savages and A Dead Forest Index, performed with Rosalie Wahlfrid-Shaw for Station to Station at Barbican, 2015. Also working with Project O, Pepa Ubera, Xavier Le Roy, Marten Spangberg, Marvin Gaye Chetwynde, Eddie Peake, Cecilia Bengolea, Adam Chirstensen, Pablo Bronstein, Yvonne Rainer, Simone Forti and Ina Dokmo amongst others. She is also co-founder of the trans-disciplinary performance night London Topophobia.