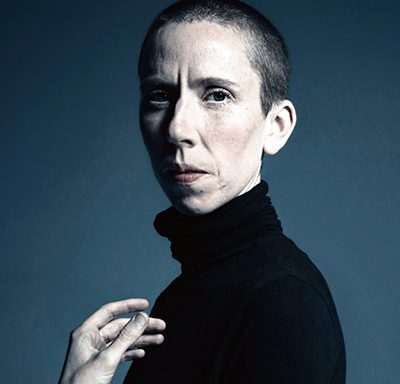 Julie Cunningham has worked professionally as a dancer for fifteen years. After training at the Rambert School of Ballet and Contemporary Dance in London, they worked with Ballett der Stadt Theater Koblenz, Germany, Merce Cunningham Dance Company, and Michael Clark Company, and in projects with Boris Chartmatz, Thick & Tight, and with poet, Anne Carson.

Julie is a guest teacher at Trinity Laban and Zurich University of the Arts.

In 2014 Julie was awarded “Outstanding Modern Performance” at the Critics Circle National Dance Awards for New Work with Michael Clark Company. Julie was nominated for the emerging artist award for choreography in 2016.

Julie was the inaugural Leverhulme Choreography Fellow at Rambert and was part of the dance artist/curator mentorship program through Siobhan Davies Dance. In 2018 Julie became a New Wave Associate of Sadlers Wells, and associate artist of Dance East.

Julie Cunningham & Company was launched in 2017 at the Barbican and became associate company of Rambert in 2018.