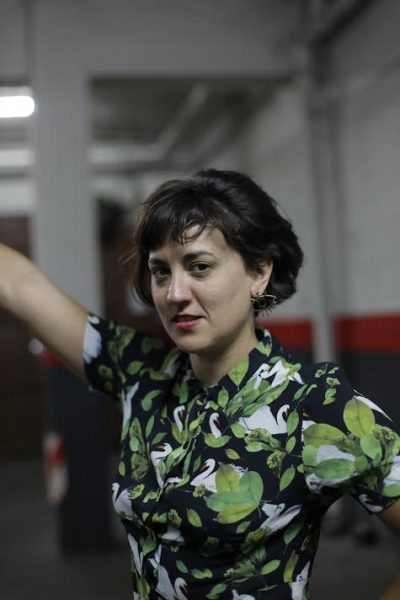 Pepa Ubera is a performer, choreographer and curator based in London.  Her choreographic and curatorial work is deeply related to her interest in social choreography and audience interaction and is intrinsically collaborative. She is involved in several strong international networks and often works with an international team of collaborators.

From 2013-2015 she was a core member of TripSpace Projects. Her role included curating monthly nights of performance, with events including The Palest Light and LIMEN (a two-day event in partnership with the Hayward Gallery). The collaboration also included an invitation to create work for the major exhibition MIRRORCITY at Hayward.

Ubera co-curated PART-TY at BRUT Vienna, a continuation of the work with artists met at Impulstanz through two DanceWeb scholarships. In 2016 she curated and performed in The Palest Light as a Wild Card event at Sadler’s Wells (SW), signalling the evolution of a strong ongoing partnership from her time as a SW Summer University 2015-2018 artist.

In winter 2019 Dance4 brokered a residency for her at Critical Path in Sydney Australia, during which time she laid the foundations for CHARCO and the Machine of Horizontal Dreams. She also undertook a residency at TasDance Tasmania and a week of teaching with PPY Sydney Dance Company. In addition, Dance4 invited Ubera to be one of the UK delegates at DanceMassive Festival Melbourne.

Other residencies have been with Micadanses Paris, Charleroi-danses Brussels, K3 Hamburg,  Teatros del Canal Madrid and The Place.